Another entry from grade 2 for our review competition. Langston tells us ALL about Horrid Henry in this review. 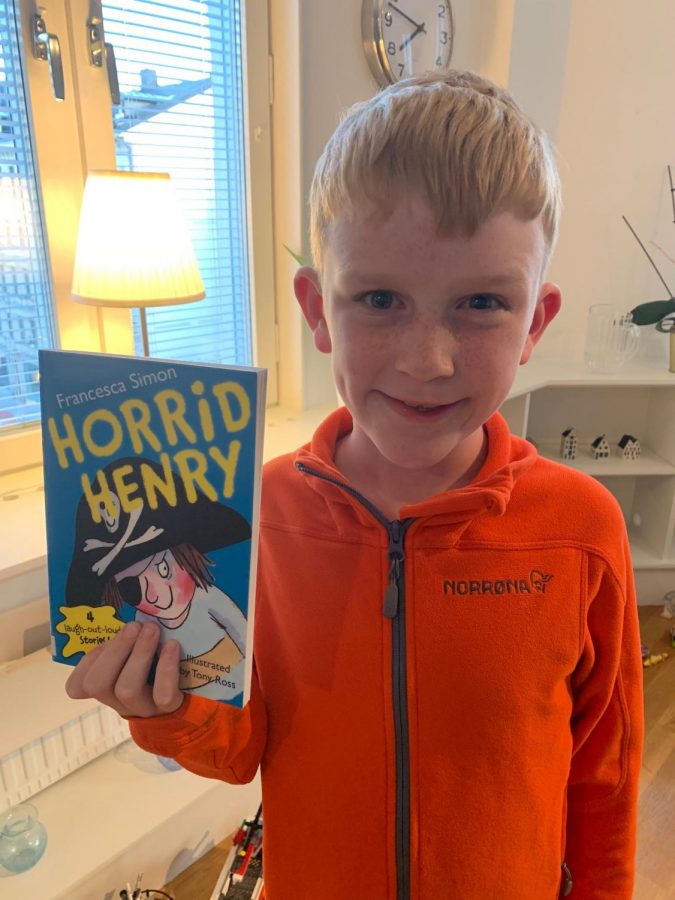 Horrid Henry is a book about a boy called Henry who is always being bad.  The book has four chapters that all make you laugh.

This chapter is about how Henry ruins the dance show. In the show, Henry had to stand behind a leaf because he was causing trouble in dance class.  He said to the teacher, Ms. Tutu, “Nobody can see me” and then Henry knocked down the leaf and the dancers dressed as raindrops fell down. Then the raindrops fell on the dancing tomatoes and the tomatoes fell on the beans and the beans fell on the bananas.  And Henry started doing a buffalo dance. When the performance ended only Henry and Peter’s parents clapped. Horrid Henry is NEVER going to be invited back to dance class! I liked this chapter because Henry knocked down the class during the performance and ended up doing a solo.
Chapter 3 “Horrid Henry and Moody Margaret”
I like this chapter because it teaches you how you shouldn’t act on a playdate.  Margaret makes Henry do things when he plays with her like making Henry be a baby.  Henry agrees to do this so he can play with Margaret’s stuff. At the end of the chapter, Henry and Margaret make Glop (a disgusting mixture of food) and try to feed it to Peter.

Chapter 4 “Horrid Henry’s Holiday”
In this chapter, Henry goes on a camping holiday and he is excited because his friend Moody Margaret went camping and had a pool, a tv, a couch, and a comfy bed.  He thinks he is going on a camping trip like Margaret’s but he ends up in a normal camping site with an outhouse, a tent, and a wet sleeping bag. After a horrible experience at the campsite, they end up leaving and going to a place like Margaret’s.

I would like you to check this book out.