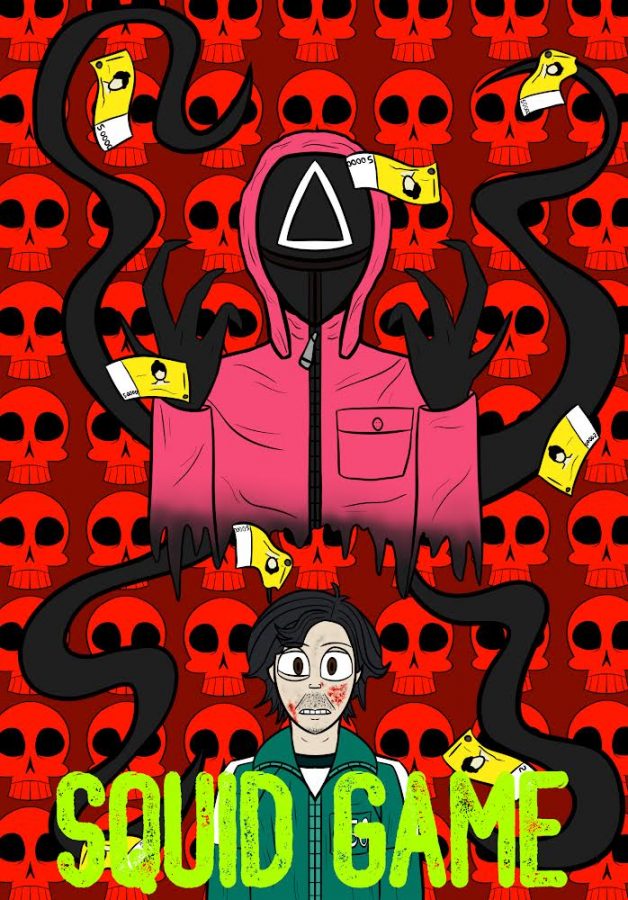 Everyone has a game that reminds them of their childhood. Games such as hide and seek, and tag which have a simple set of rules yet lie deep within our memories. But what if you could make a great fortune out of these games? Would you take the chance?

Upon its release on September 17th, the Korean series Squid Game received a great deal of attention from its global audience. It was ranked as the most-watched show on Netflix Sweden, receiving an IMDb score of 8,3/10 and a Rotten Tomatoes score of 100%.

The plot begins by main protagonist Seong Gi-hun (played by Lee Jung-jae) receiving an invitation to a survival competition known as ‘The Game’ by a mysterious man in the train station. After losing his entire fortune through gambling, Gi-hun was living a treacherous life indebted to loan sharks. Desperate for the money rewarded in The Game, he decides to join. Once he arrives at the game room, Gi-hun notices 455 other contestants like himself searching for money to repay their debts. An army of soldiers wearing red uniforms and black face masks enters the room, and The Game begins.

The Game consists of six rounds, each being a separate game that all Koreans played as a child. For the winner(s) of all six rounds, there is a prize of ￦45.6 billion. Thirsty for this reward, the players hurriedly begin their first round, which is a game of ‘Red Light, Green Light.’ In this game, the players must run towards a finish line within a time limit while a robot shaped like a girl calls out red or green light. If a player is caught moving during red light, they are out. The players begin with these rules in mind, yet soon realize that this game has one more deadly twist to it: all those who lose are gunned down on the spot. The playground turns into a site of fear, panic and massacre, marking the true beginning of The Game.

When I first saw Squid Game on Netflix, the first thing that caught my attention was the cast. The series stars famous actors such as Lee Jung-Jae, Park Hae-soo and Wi Ha-joon, guaranteeing good acting. The use of childhood games as different rounds of a survival competition was a fresh idea as well. Not only does the audience learn about the traditional games that children play in Korea, but the innocence of childhood combined with the cruelty of The Game creates a sense of eeriness and black comedy. As a person who played some of these games myself as a child, it amazed me how each game was portrayed to keep the audience at the edge of their seats.

Another thing that stood out was the series’ message about human nature. As the game progresses, the characters are put in many situations where they must choose between money and humanity. During these scenes, I constantly thought to myself, “what would I do?” Despite the plot taking place in an extreme setting, the message delivered through it was applicable to a universal audience.

Overall, I would recommend Squid Game to young adults who enjoy spine-chilling survival series. All 9 episodes are extremely engaging, and there is not one scene that is boring. The only point of caution I would like to mention is the graphicness, as there are a few violent and sexual scenes that some may find uncomfortable. Otherwise, if you are looking for a new series to watch on an unbusy Saturday night, here is a good one to start!