The Last Time We Say Goodbye: A bitter-sweet story

Hope you’ve all had a nice break. Here is this years first review, enjoy. More news and views to come soon. 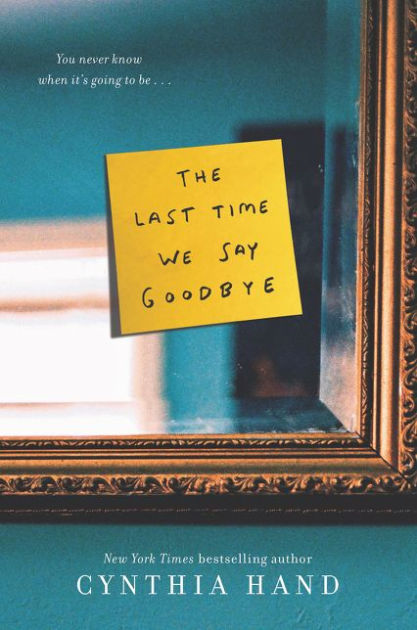 You know the feeling you get when you hold your breath for a long time? How everything around you stops moving. How your heart begins to beat quicker and quicker, and how sharp it all becomes as the fuzziness lifts. If you don’t know the feeling then read The Last Time We Say Goodbye by Cynthia Hand to find out.

The book is about Lex Riggs, who’s dealing with the aftermath of her parent’s divorce and her younger  brother’s suicide. She went from having amazing grades, fantastic boyfriend and friends, to having it all shot away. She lost Ty and blames herself for it. Lex believes that she could have stopped it. That she could have saved him. This guilt is shown through violent dreams, panic attacks, and her separation from everyone around her who are trying to help. She sees her brother’s ghost one day and believes that he has something left to take care of. Is the ghost real, or just a figment of her imagination?

Cynthia Hand was able to capture something so tragic in such a beautiful way. I was able to see Lex´s present and how she and the people around her are dealing with Ty’s death. You also get to learn events leading up to his death, through Lex’s diary entries that her therapist made her write.

“Time passes. That’s the rule. No matter what happens, no matter how much it might feel like everything in your life has been frozen around one particular moment, time marches on.” This particular quote, in my opinion, gives a summary of the book as a whole. It’s not just a story about death, but rather about forgiveness and moving on. Lex needs to forgive her father for walking away, her mother for not being strong enough, her friends for feeling bad, and her ex boyfriend for giving her everything. She needs to forgive herself for not being there for her brother, for not being able to save him.

This was my first book by Cynthia Hand, but it definitely won’t be my last. The Last Time We Say Goodbye is a book that will stay with me for a long time. I highly recommend this book. It’s an emotional ride worth taking.